75
Speakers
We have 75 confirmed speakers. Click to see who is speaking.
13
Tracks
We offer 13 tracks, click to read more about each of them.
900
Attendees
Register Today!
Veilingzaal

Knowledge is Power: Getting out of Trouble by Understanding Git

Git is rapidly taking over the development workplace, and nowadays it is integrated with many development, testing and deployment platforms. But one of the downsides of high-level tools is that they can hide the details of what is happening under the hood. So when things go wrong or just get complicated it can be hard to understand why Git behaves the way it does. But at its core Git consists of a few simple concepts that, when understood, make it a much more intuitive tool and enables powerful workflows.

This talk introduces these core Git concepts and uses them to clarify some examples of seemingly counterintuitive behaviour. It also introduces some of Git's less-known features and tricks that are useful to have in your arsenal. This is an intermediate-to-advanced course for developers who are already using or investigating Git and want to gain a greater understanding of how it works.

What will the audience learn from this talk?
The talk will cover the fundamental building-blocks of Git from the simple objects on disk up to the higher-level concepts these create, such as commits, branches, and rebasing.

Does it feature code examples and/or live coding?
It features command-line examples of inspecting and manipulating Git repositories. 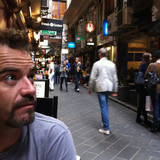