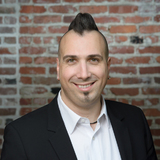 Christof Leng is the Uber-TL for Google's SRE Engagements group. The teams in this area manage the programs, best practices and tooling for successful SRE/developer engagements. In his six years at Google, he has managed and worked on various parts of its production infrastructure, including Cloud, Ads and internal developer tooling.

He holds a PhD in computer science from TU Darmstadt, where he researched distributed systems. Christof has been a postdoc at the International Computer Science Institute and the University of California Berkeley. He served as a vice president of the German Informatics Society and the chairman of the German Pirate Party.

Check out some of Christof’s past talks: