Urban Legends: What You Code Makes You Who You Are

PJ Hagerty is a senior developer advocate at Mattermost and board member of Open Sourcing Mental Illness.

He's traveled the world speaking about programming and the way people think and interact (and he wears nice hats while doing it).

If you were a carpenter, would your skills at building be more important than the tools you use to build? Skills, right? Tools are just a means to an end. So why do developers think the language they use defines the problems they solve?

This talk will take a look at misconceptions across the board, some experiences, both positive and negative, people have had crossing barriers to new languages, and show some of the benefits thinking of one's self as a coder and not a "Ruby coder" or an "Elixir dev" can have on being a better problem solver.

The idea that we know everything there is to know about programming through one tool or language is a bit off. This talk will focus on the stereotypes associated with certain languages, the biases between Open Source and Enterprise, and the importance of continuing to learn the craft of coding. 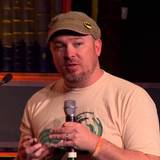