Learning to program can be hard. Not that programming itself is hard! Hedy is a gradual programming language to make learning programming easier for all kids that want to learn. The core idea of Hedy is that it uses different language levels. In level 1, there is hardly any syntax at all, for example printing is done with:

In every level, new syntax and concepts are added, until kids are doing a subset of Python in level 22 with conditions, loops, variables and lists. The leveled approach means that learners do not have to learn all syntax rules at once. Hedy is aimed at children that want to get started with textual programming languages, but for whom starting with Python might still be too complex.

Hedy is open source, runs in the browser, is free to use, and available in seventeen different languages (Including English, Spanish, Chinese and Hindi). It was launched in early 2020 and since then almost 1.5 million Hedy programs have been created by children worldwide. You can try Hedy at www.hedycode.com.

In this talk, Felienne will dive into the pedagogy behind Hedy, but also expand on the technical aspects of Hedy. For example, a set of increasingly complex grammars, rather than one grammar, poses new challenges for language design. 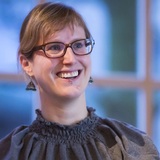